Cath and the city: my love affair with Vancouver

This is Part 1; it got too long for a single post. Part 2 soon! Not necessarily next, but soon.
Mr E Man and I met up with friends for brunch on Sunday, and were amused to find that together we'd been living two thirds of a popular Vancouver stereotype; we'd been golfing on Saturday, and they'd been skiing. If only someone else had gone sailing, we'd have had the whole set of things you can allegedly do on the same day.

This is one hell of a city, which I think has probably come through in some of my previous posts. But I think it's about time I told the tale of how I ended up living here. 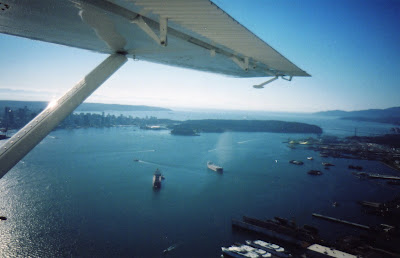 Vancouver as seen from a float plane
I bought the tour as Mr E Man's birthday present, September 2004 or possibly 2005
It wasn't supposed to happen; my original plan was to get off the train from Toronto when it arrived at 7 am and go straight to Seattle. Seattle, in my mind as a 20 year old student in 1997, was all Nirvana and coffee and coolness. In contrast, I knew precisely 2 things about Vancouver: it's where the train terminates, and where they film the X Files1.

But all that changed when I met a Vancouverite who was sitting near me as the train pulled out of the station in Toronto. As two of the ten or so non-smokers in the smoking carriage (the only ticket I could get at short notice), we ended up sitting together when the passengers very democratically decided to move around in order to seat the smokers and non-smokers at opposite ends of the carriage. I think her name was Selena, or maybe Serena; we stayed in touch for a couple of months, but then our emails slowed to a trickle and stopped, as emails to temporary travel buddies tend to do. I wish I'd stayed in touch, because I'd love to thank her for what happened next.

Upon discovering my plans, she insisted that I change them. As we rolled through the Canadian Shield, the Prairies and the Rockies, she extolled the virtues of her native city and eventually got me to promise to stay for at least one night. She was moving to a new apartment the next day so she couldn't put me up, but when we arrived in Vancouver after 3 days of cards, chess, beautiful scenery and surprisingly cheap beer, her Mum was waiting to pick us both up and to drive me to my all-time second favourite youth hostel2 on Jericho Beach.

On my first night I joined an international group of travellers for a BBQ on the beach. Watching the sun set over the Pacific to my left, with mountains in front of me and the city lights to my right, I looked at the happy people walking, cycling, swimming and hanging out with friends all around me, and said to myself, "I'm going to come back and live here and be one of these people". 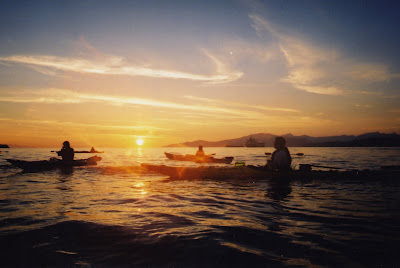 Sunset paddle at Jericho Beach, summer 2002
Three days later I decided I really should get myself down to Seattle. It was OK, not great, despite the unexpected sunshine.

When I got back to the UK, I had one year left to go in my undergrad degree. My original intention was to do my PhD in Vancouver, but my adviser talked me out of it. Knowing what I do now, it was absolutely the right decision - three and a half years instead of five or six, no classes, all research all the time from day one onwards. "You can always go to Canada for your postdoc" she said.

So, I did. Getting dumped by the wanker for whom I'd been prepared to stay in the UK turned out to be the best thing that ever happened to me. (Not that you could have persuaded me of that at the time). I was looking for suitable labs in Vancouver within about two months of D-Day3 and arrived in February 2002.

My academic reasons for choosing the lab I did are given elsewhere, but I'd be lying if I said the location wasn't the most important factor. Luckily for me I loved the lab and my research went really well, so my PhD supervisor's warnings about choosing labs for the wrong reasons were unnecessary, although not unappreciated. (I mollified him somewhat by pointing out the lab's excellent publication record).

After spending the first few weeks surviving, adapting and otherwise settling in, I eventually rode my shiny new bike (I still have it, but it's not so shiny) back to Jericho Beach. I sat on the sand, looked at the mountains, and congratulated myself on getting myself back here. It only took four and a half years, and I knew that the next two years (the duration of my work permit) were going to be great.

That was over six years ago, and I was right! Part 2 will describe how living in Vancouver is very different to visiting, but how despite the city's shortcomings, I can't possibly imagine living in any other city.
____________________

1. I've just started watching the X Files again from the beginning and it is so damn cool to recognise the locations now. Plus, that was one excellent show when it first started, and for at least the first five or six years IIRC. And Mulder had his shirt off in roughly every second episode of the first season, which is a bonus. I know at least one reader who will agree ;) I can't wait for the new movie, even though Mr E Man ignored my pleas to try to find a way to work on it. I just wanted to go to the wrap party. If I'm really really lucky I might get to see Ben Stiller again instead. Boooooo. Although Owen Wilson did look at my boobs last time, which was cool. Yes, I've had too much caffeine today. Why do you ask?

2. My favourite is in Florence. It's a converted villa on a hill outside the city, has its own vineyard and smells of fruit.
3. Dumping Day.