The ghosts of St Patrick's Days past

1997. I’m an undergrad in Newcastle. The lunchtime pints of green Caffrey’s. The late arrival at a small group seminar in a darkened room. The realisation that the only chairs left are stacked up at the back of the room. The knocking over of said stack of chairs by my drunken friend. The giggling. The staring. The sudden improvement in our street cred.

1999. I’m doing my PhD in Glasgow. The realisation that it’s much harder to get away with a hangover when doing lab work rather than attending lectures. The group decision to make an exception to the weeknight drunkenness ban. The massive party. The epic hangover shared by all students in all labs in the department. The rolling of many PIs’ eyes at this dreadful behaviour. The shaking of my friend’s hands as he tried to pipette into teeny tiny PCR tubes. The dropping of my CAT assay thin layer chromatography plates into the tank of solvent. The CAT assay that, instead of looking like this, 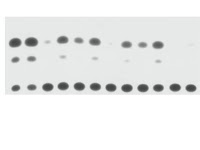 looked like a frog. The legendary response of my supervisor, who’d had a few hangovers in his day: “Well, that’s not much use to me. Maybe you could submit it to the Tate”.

2003. I’m a recent immigrant to Canada. The confusion at the different manner of celebrating St Patrick’s over here. The “family-friendly” parade downtown (WTF? St Patrick’s is not supposed to be family friendly). The bar. The arrival of the kilted Scottish bagpipe band. The realisation that when in Rome…

2008. It’s Monday. It’s not fair. I’m too old for such bad behaviour these days. I did celebrate a Patrick’s 40th birthday on Friday, and I’ll have a glass of Jameson’s Irish Whiskey tonight. That’ll have to do. I’m only half Irish after all.
Happy St Patrick's Day!
p.s. another conspiracy theory and some actual peer-reviewed science on my Nature blog.