Well, we couldn't have picked a nicer day for my first protest rally! 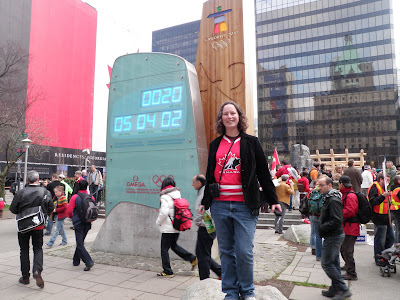 It all started off a bit chaotic; lots of signs, a carnival band, an underpowered PR system, and no visible organisation. 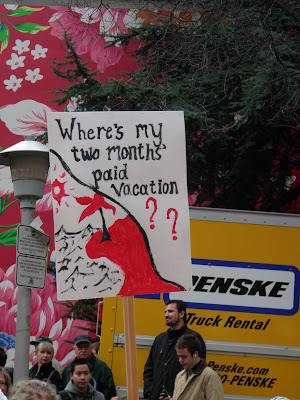 I did spot my MP, Don Davies, and I was just about to go over and introduce myself when we started our march to Victory Square.

Here's one of my first ever videos... I'm still getting to grips with the camera (a Christmas present from my sister) and with iMovie, so please bear with me! (And can I just say once again that Macs and iLife RULE??!! Adding the music* at the end was super easy. I am very impressed so far)


The march was really good fun (and I was ridiculously proud of my "more cowbell!" moment). The first few speeches at Victory Square were good, too, and we enjoyed some more creative signs. 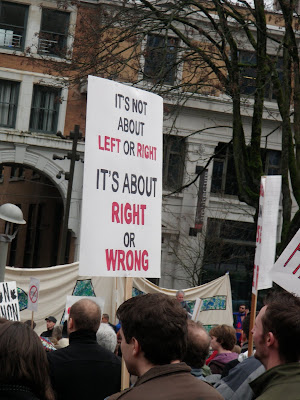 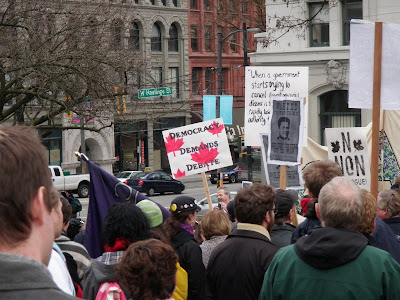 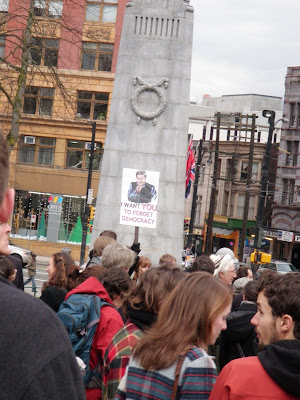 The MC was fantastic. Best moment:

MC: "And we have some elected representatives with us on stage today,"

MC: "Are you protesting the concept of elected representatives? Because I think you might be at the wrong rally"

Heckler: "(Something) Harper (Something Something Mumble) power!"

But to be honest, an hour of speeches was enough and we took an increasingly cold and disgruntled Morgan to warm up in a pub.

Overall, it was a very positive experience. I do have to say, though, that the crowd was smaller than I'd been hoping. Enough to stop traffic, enough to make a point, but nowhere near the crowds they attracted in Toronto and Ottawa. In part this is because of the skewing of parliamentary representation towards the East - a mixture of not keeping up with greater population density in the West, appeasing Quebec, and the effects of the time zones means that elections are pretty much already decided before the polls in BC and Alberta have even closed. Hence greater voter apathy in the West - and we all know that voter apathy is the true enemy, especially when skillfully manipulated by people like Harper**.

So it was interesting that among all the usual special interest groups that piggy-backed on this protest***, the electoral reform people were the most prominent, handling out lots of literature and having a speaker on the programme. We've discussed this before on here, and I still maintain that a mixed system like the Scottish one would be better than the pure PR system that others favour. But the current situation is clearly not tenable. The rally's organisers stressed that Saturday should represent just a beginning, and I have to agree. Harper won't care how many people came out to protest against his shenanigans unless he takes a much bigger hit in the polls, so while I'm not going to give up protesting prorogation, I am also going to look into what I can do to help the electoral reform movement. It's obviously not in the interests of the ruling party (or the Liberals, as official opposition) to change the status quo, but it does feel like momentum is building (in Ontario if not in BC), and people are in this for the long haul.

**You might be able to overhear in the video part of a phone conversation with a friend we thought would have wanted to attend the rally. This person is very politically aware and has been to other protests in the past, but didn't think this rally was for them. But really, what's the point of protesting environmental or foreign policy decisions when there's no parliament in session to do anything about it?

***I got a flyer from the Marxist-Leninist party of Canada (good luck with that, guys), and Mr E Man and I were both approached by a rabidly anti-Olympics protester.


Protester: "Do you want some information about how to protest the Olympics?"


Mr E Man: "No thanks. The Olympics are paying my bills right now."


Protester: "Yeah, I wouldn't admit to that in public. Not around here anyway"

Mr E Man: "Would you rather I was collecting EI?"


Protester: "Do you want some information about how to protest the Olympics?"


At that point, he gave up and went to bother some other people.
Posted by Cath@VWXYNot? at 8:23 a.m.