What better way to celebrate BC Day than to show you some lovely views of Vancouver from this weekend?

On Saturday night we had a very disappointing dinner at a pub that obviously coasts by on its fantastic location on the waterfront without paying much attention to the quality of its food, beverages, or service. The best part was watching the parade of boats heading out into the harbour to watch the fireworks, and trying to decide which one we'd buy if we had the money.

There are some very bizarre boat names out there, which led to some speculation on their origins:

Amesia IV (they forgot where they'd moored the first three, so they had to keep buying new ones)

We then headed to a friend's fantastic penthouse apartment to watch the fireworks and admire the view:

Burrard Bridge (you'd think that the owner of a penthouse suite would be able to afford to clean his windows, eh?) 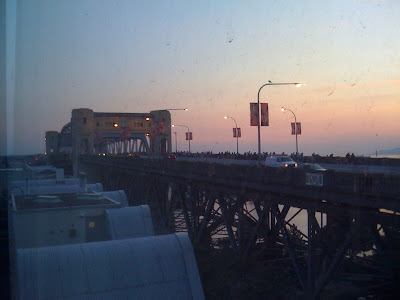 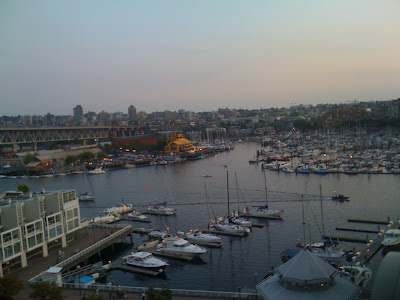 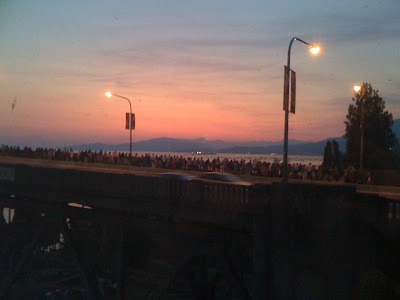 To watch the show 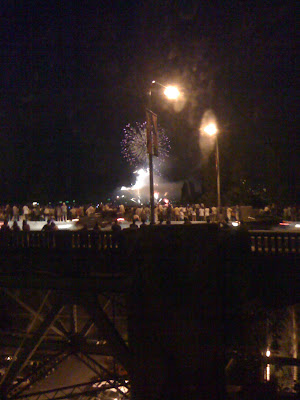 The fireworks were part of an annual international competition; Saturday was China's turn, and they put on a hell of a show. I hadn't seen any of the other entries though. I know it makes me sound boring, but after watching from a boat, or someone's aunt's beach-front apartment, or a wealthy friend's penthouse, watching from 5 rows back on the beach or bridge and fighting either the crazy traffic or the mental transit crowds just doesn't seem worth it. So now we only bother if we're guaranteed a spectacular view! This makes us pariahs in some Vancouver circles.

------------
Yesterday was our friends' 4th Annual BC Day Weekend BBQ on Spanish Banks beach. We had a huge crowd of friends, complete with loads of kids and several dogs, one sporting a jaunty red feather boa in honour of Pride Week; we played bocce ball, we swam, we ate chicken wings and salmon and potatoes and salads and cookies, and drank lots of beer. We then headed back downtown (I spent more time downtown this weekend than in an average month) to an out-of-town friend's hotel suite, for yet more spectacular balcony views: 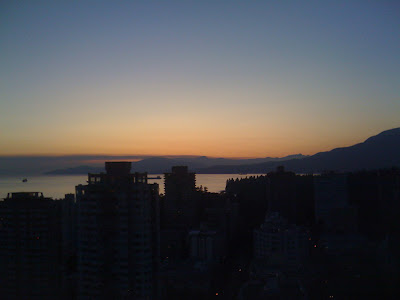 I swear that the tourist board is not paying me!