Maybe you CAN go home again

During my last visit to the UK, I met up with a good friend who was also my roommate for three years while we both did our PhDs. 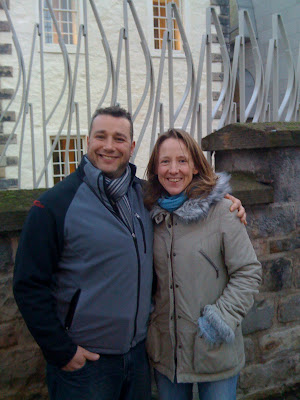 Former Roommate attempting to steal my "perfect Canadian husband", as she calls him
As we said goodbye at the station after a day of showing Mr E Man around the pubs of Edinburgh, she said "you know, when you moved to Canada I thought I'd never see you again. But you come back. I see you every couple of years, and it's always like you've never been away. I can live with that."

Science is weird. Everyone moves so often that you end up with friends all over the world, but with only maybe one or two friends left in the town where you all met. My experience in Vancouver has been different because, for the first time in my life, the majority of my friends are not students and post-docs. Not that people don't move away, because they do; in the last year I've said goodbye to two good friends, both of whom moved to be closer to their families (Ontario and UK) after failing to find affordable childcare in Vancouver.

But on Friday, one of them came back! She still works for the company I left in 2007, and was back in town for training, along with a couple of other former colleagues who have also left the main office to spread out around the world. We all went for beers after work, and again it was as if she'd never been away. It felt so natural to sit on the sunny patio with a pint in hand, and to chat about work, families and life in general.

Having cried at someone else's leaving party recently, I find this to be very reassuring. With some people, it will always be possible to start up again exactly where you left off. True friendship doesn't fade with time or distance.
Posted by Cath@VWXYNot? at 7:58 a.m.